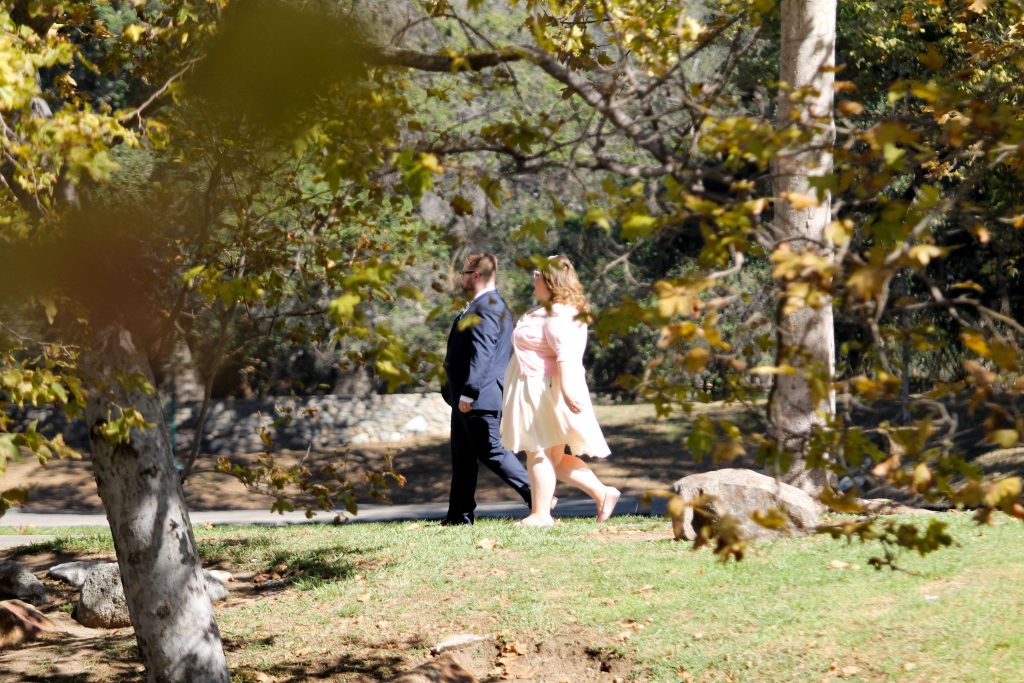 When Steph emailed me and asked if I would be up for shooting an elopement in Irvine, she had no idea that she could have a Disneyland Elopement. They were from Vancouver, BC and wanted to have a destination elopement in a park and have their mini-moon at Disneyland. I let her know that I would love to photograph their destination elopement oh and by the way Dapper Day is the day they were getting married. In her email back to me she was freaking out and said, you’ll see why when you look at the engagement photos. They were vintage and her dress had Disney Castles all over it. I knew from that moment that this Disneyland elopement adventure was going to be awesome.

They knew each other from a small online community but only in passing. She was in his city and mentioned it so we set up a date and she missed the bus and was so late,  and she didn’t even have a cell phone at the time so he left. It was so embarrassing…  she called him that night and apologized so much and they made another coffee date to hang out.  Steph got to the cafe half an hour early. When he walked over to her it was like… Instant connection and they’ve been together since.

Their idea for the day:

Steph actually watched a really beautiful elopement video years prior and had it in her head since that day that it was so beautiful and intimate. When they actually got engaged, however, so many people were excited and asking about it but she completely froze. Then one day after a year or so of the engagement had passed, Steph suggested a destination elopement in California and it clicked. They both got excited and managed to keep the secret for seven months until they went on holiday. Of course, they both love Disneyland and he proposed there so being able to work around that was so important. Other than that, they didn’t want a fuss and just wanted to be together as they always do and a Disneyland elopement was perfect.

If you want a wealth of information on Disneyland Weddings and Disneyland Elopements see my friends’ blog: Fairytale life

Here’s this wedding featured on Offbeat Bride: Eloping to Disneyland on Dapper Day